Even though it's often hard to understand what's being said, it doesn't matter. Partly because we all know the story already, at least to some extant (I only knew the absolute basics). But mostly because the emotion tells the story - the emotion, the action, the cinematography.

It seems like this was one of the early MTV-style movies (or were there earlier ones?), but looking at it now, it has an incredible wealth of depth - of characters and detail, all perfectly balanced, in such a way as movies no longer know how to do.

Acting, direction, camera, sound - all stunning to behold. And what's more - all relegated to the skillful telling of the tale. That's what's been mostly lost as the venerable Hollywood of old transformed from supporter of filmmaking artists to profit-driven mega-business mavens who make no decision without consulting those oracles of modern mass entertainment - the almighty focus group, the infallible demographics study, the indispensable computer logarithm.

This page I discovered goes far toward explaining why the movie exudes brilliance, while it could have easily gone so wrong: Baz Luhrmann interview @ Peter Malone

Just a couple of nuggets:

"We don't know a lot about Shakespeare, but we do know he would make a `movie' movie. He was a player. We know about the Elizabethan stage and that he was playing for 3000 drunken punters, from the street sweeper to the Queen of England - and his competition was bear-baiting and prostitution. So he was a relentless entertainer and a user of incredible devices and theatrical tricks to ultimately create something of meaning and convey a story. That was what we wanted to do."


"Hollywood! People have many wrong ideas about Hollywood: firstly, it's much worse than The Player, much more bizarre. In fact it's a community in the desert, made up of people from all over the world, the best people from all over the world.
Now, what normally happens with the internationals - and most players in Hollywood are internationals - is that they are hired with their producer and they pick up American teams. One of my non-negotiables is that I work with my team - we work together, we are a team, we are an environment. Since the success of Romeo and Juliet, I now have an unprecedented deal where working with my team is actually ensconced in the deal."


"You couldn't set it in the real world because it would then become a social exploration of Miami or LA or Sydney, whatever. So we decided to create a world. That world was created from meticulous research of the Elizabethan world. For example, a social reality for the Elizabethan world was that everyone carried a weapon. Then we found a way of interpreting that in the 20th century. There were schools of swordfighting; they became schools of gunfighting. Only gentlemen would carry weapons, not the poor."


"I mean, the truth is this: the one thing we know is we don't know much about Shakespeare, but he was sure as hell focused on box office and he is not displeased that he's packing the houses. I know! William Shakespeare was an actor in a company that was competing with another. All they cared about was packing the house. Who is worried that we put rock music in? Oh, here's the news - he put popular songs of the time in his shows because it was a good way of telling a story!"


"It is true we are intensely visual, and that intense visual language has to be freeing, not oppressing. We make pictures. Cinema is like opera, strangely. That's why cinema directors do a lot of opera and vice-versa, but not necessarily plays. They are the synthesis of the visual, the plastic, the written, the acted, the audible, the audio arts, synthesising all those things into one singular statement... but in the telling, the visual representation is a good 50% of that."


"We shot in Mexico and Mexico is very, very, very Catholic with Catholic iconography everywhere. The giant statue in the middle of the city, that is Mexico City, with Jesus' statue put in the middle of the city. That's an electronic addition. All the iconography was about the fact of the plot point that when you marry, it is in the eyes of God. Families can't pull the couple apart. So the slightly-on-the-edge priest says, `but actually, if you do get married, the families can't do anything about it; so it's a way of forcing them to stop running around killing each other'. It's a key plot point in the play. It's very weak dramatically. So you have to have the audience believe that no-one questions religion, no-one questions the existence of God or the power of Jesus Christ. So when Juliet says, `No, if thy love be honourable, thy purpose marriage', Romeo could not say, `Look, you don't have to get married to have sex'. There's no argument about the fact that they existed in a religious context in terms of their thinking and beliefs. So it turned out like an Italian/Mexican/South American location. I mean, when you're in Mexico, religion is absolutely wrapped up with politics."


Maybe I ought to stop posting excerpts and put the link up again, huh? Let the man tell it himself: Baz Luhrmann interview @ Peter Malone

Ok, I can't resist - one more for the road. Scenes from the movie were cut up and montaged together for this, but the song is from the sound track, and it all works together beautifully:

God, it's been so long since a movie commanded so much power and did it with so much style...

Quentin Tarver was one of my favorite singers on this soundtrack- every song is great, but Tarver is a tenor, and he has some very high notes! At least, that's what I thought... Until a singing teacher discovered that I was an undeveloped tenor. Since then, I've spent two years developing a singing range from a thin and shaky C2-C4 (2 octaves) with falsetto from C4-C5 to what is now an ever-thicker C2-C5 (3 octaves) with falsetto from C5-A5! AMAZINGLY, this version of "When Doves Cry" has a top note of around C5...Not as high as I thought! That goes ditto for "I Just Can't Wait To Be King" by Jonathan Taylor Thomas from The Lion King. The highest note of that song is also C5. It's the TIMBRE of these voices that makes them sound so high, not just the notes they're singing! The overtone harmonics of a sung pitch can really fool you, and so can a very deep voice singing high notes. I don't have a singing blog, but probably should after studying classically and reading scientific whitepapers on the health and longevity of the singing voice.

Argh, I meant to also mention "Everybody's Free"... I like that one even more than "When Doves Cry". Of all the songs in the movie, my favorite is "Exit Music (For a Film)". Covered it several times over the years, but can never find it at karaoke. It's also very difficult to post song covers- they always get flagged with a copyright notice.

Wow, sounds like you've got a lot going on these days! And I agree, you should get back to the blogosphere - you seem to have a lot to say - more than a comment on somebody else's blog can really accommodate. That's some really technical stuff - if I didn't know you were talking about singing, I'd think it was about explosives (C4) or maybe buying batteries! ;)

Hiya Mike, I did recently start a blog for Puppet Putty (puppetputty.blogspot.com), but have not felt the need to be online that much and have not updated in awhile. Lately, the focus has moved to working behind the scenes, making clay for animation studios and studying singing when work is slow.

Went to see the House Special presentation last night at the Hollywood in Portland, and that was quite an experience. There was an animator working on a shot for about an hour onstage as the director fielded audience suggestions for how it should go. As far as I know, that has never been done before in stop motion. It was really neat to see an idea come together from sketch to playback right before our eyes as the producer, director, and other members of the crew put everything together and talked about the process.

It's kind of strange- I'm not as interested in animating these days, having gotten most of that out of the system while studying with Will Vinton and Barry Bruce at NW Film Center in 2012 and 2013. Outside of seeing what other people are doing, giving them a tool to make their work faster and easier is more fulfilling than using it selfishly on my own shorts. If you've been watching on Youtube, clay is coming back hard- although this time under the guise of "play doh" videos. Some really creative shorts are being made and I've seen a couple of claymated commercials here and there too.

It's really fantastic to have created the clay for a lot of that stuff. People will buy every color we have in stock, and it's not always clear what they do with it as notifying a manufacturer that you're using their product is not a requirement. Let me say, though, it is really, really great when they do! I love feedback and get positively energized and inspired when someone posts what they've made with Puppet Putty. It's not even the same energy as what I was doing in the music and humor writing. That stuff could be pretty dark. This is, like, the lighter side- the bouncy, happy orb in the chiaro-scuro balance of being a real person. Stop motion, and clay in particular, have always been my first love that what what are getting the lion's share of the attention these days.

So, what are you up to these days? Are you still working on that bar film?

Glad to be one of the visitors on this awe inspiring web site : D.

On the supplements said...

Darkmatters
Dark Matter - we can't see it, we can't detect it, and yet it needs to be there in order for the universe to behave the way it does. Of course it's only one of many unproven theories, but here's what it means to me -- Sometimes the most important things are those we can't understand or quantify; that which remains mysterious in this modern world dominated by rational materialism. 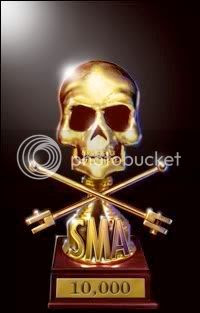